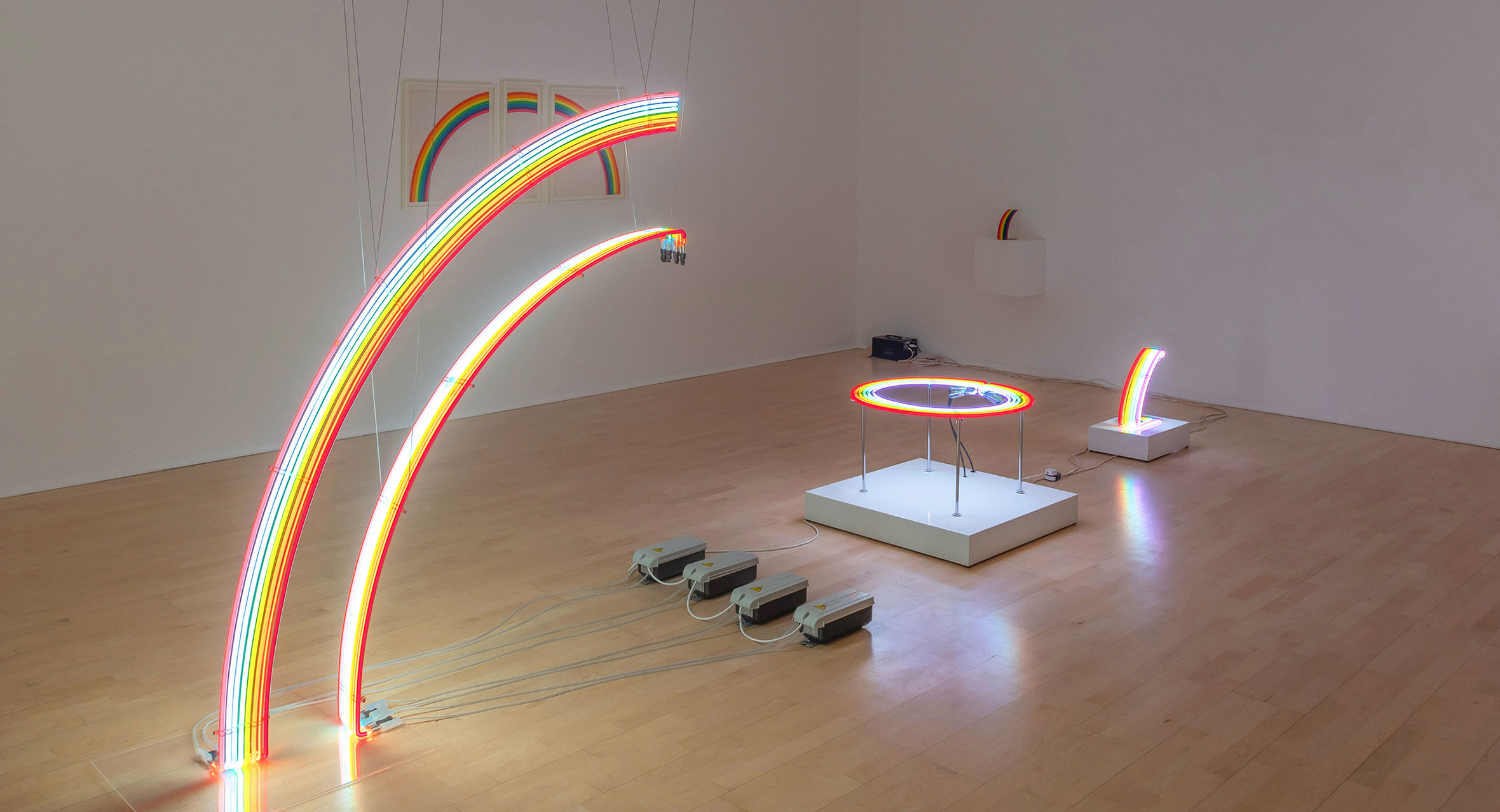 Following Cork Street Attack, the Grey Organisation’s exhibition the invited side of the glass, The Mayor Gallery restages an important 1960s show credited with being one of the first to treat electric light as a new sculptural medium.

The occasion? The second solo showing of Billy Apple at Bianchini Gallery in New York City, 1965, in which the artist took the rainbow as a central motif.

Harbouring a fascination for the science of colour and light, as well as being drawn to new products and advancing technologies, Apple (b. 1935 – d. 2021, Auckland, New Zealand) presented seven neon sculptures based on the graphic shape (and colours) strategically across the gallery floor, recreating the hues of the visible spectrum with a precision that together made up white light.

Along with these floor-based works, Apple included an editioned Rainbow multiple (serigraphs utilising arcs of brilliant fluorescent inks), and five free-standing Plexiglas rainbows, some mounted on acrylic waterfalls, neatly scaled to sit on plinths or shelves that toyed with coloured rainbow light as if it could exist in solid and liquid states. 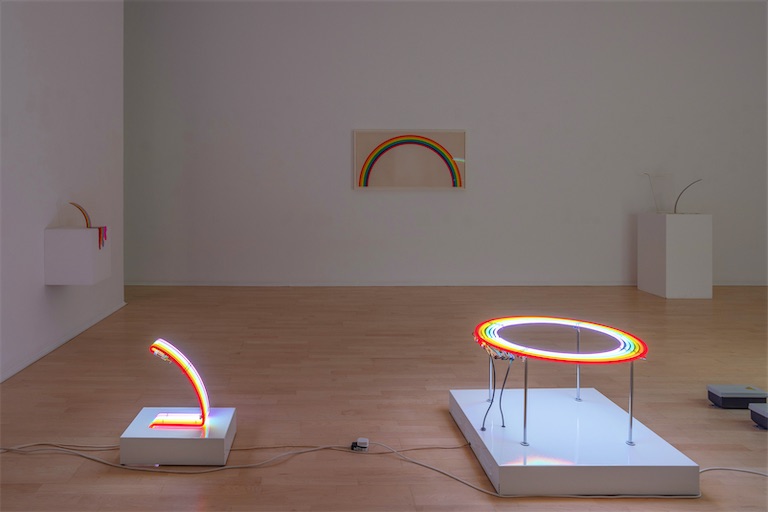 The first time Apple’s Rainbows have been presented together since 1965, the show is accompanied by a publication fully documenting the original exhibition and providing a comprehensive annotated catalogue of the works originally displayed.

Before the rainbow as an emblem of gay liberation and the LGBTQI+ community, as well as recent placement in windows, drawn and painted by children to express solidarity with NHS workers during the Covid-19 period, Apple’s Rainbows presciently point to the adoption of the rainbow as an icon of the 1960s, especially as a symbol of peace in the era of anti-war protest. 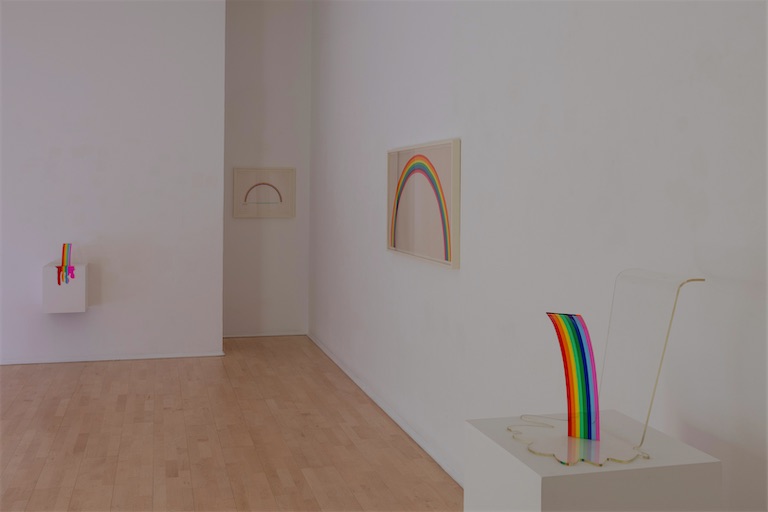 Attracted to the science of the natural phenomenon, Apple held a desire to go beyond paints or pigments and investigate an “electric palette” that could function, like the refraction and reflection of light through raindrops, an immaterial emanation of pure colour.

The artist drew on neon, the new medium as a modern mode of signage, when he was working in advertising, circa 1957, in New Zealand. It was during his student years at Royal College of Art in London (1959–1962) that Apple utilised the skills of neon glass benders – and immediately after, using the London-based firm, Brilliant Signs Ltd, to make at least three neons for his Pop assemblages.

Moving to New York, in 1964 Apple lived on the Bowery, at the heart of the lighting district, quickly making connections with the technicians, manufacturers, and retailers who could assist him in his experimentation with the coated glass tubing and mixing of inert gasses for his sculptures. 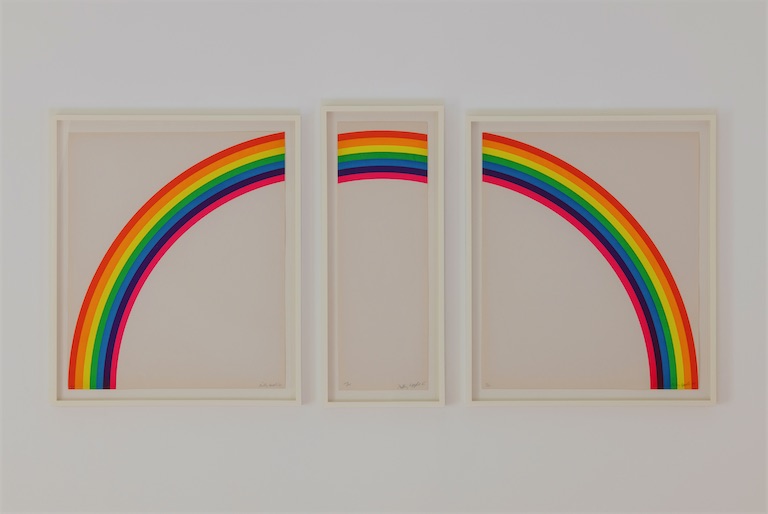 Writing in Artforum, February 1966, critic Robert Pincus-Witten described Apple’s Rainbows as “among the most beautiful that hover over the present scene”. They subsequently featured in several exhibitions designed to survey the new medium, including: Art Turned On (Institute of Contemporary Art, Boston, 1965); Art Electric (Ileana Sonnabend Gallery, Paris, 1966); and Kunst-Licht-Kunst (curated by Frank Popper for Stedelijk van Abbemuseum, Eindhoven, 1966).

Rainbows 1965 is Apple’s fourth exhibition at The Mayor Gallery, and his first posthumously. The gallery was in discussion with the artist during 2021 and heard the sad news of his passing on 6 September the same year.